This section includes a series of publications produced from our trademark pastoralist gatherings, many of which focus on peace. They use the words and images of the people who spoke at those gatherings. This section also includes articles on and reports from various pastoralist-led processes.

This illustrated book publishes the findings of a young Karimojong research team. They set out to investigate the livelihoods and strengths of Karimojong youth in the Napak and Moroto districts of the Karamoja sub-region, Uganda. The team led the research, took all the photographs and chose what material to include in the book.

A 2 page summary of the research, “Strength, Creativity and Livelihoods of Karimojong Youth”.

Action Research: How a group of young people did it in Napak and Moroto in Karamoja, Uganda

A method paper for the research “Strength, Creativity and Livelihoods of Karimojong Youth”. It highlights the principles of Action Research.

This working paper is a contribution to understandings of peace building and the strengths of customary approaches. It throws light on the achievement of peace in a five year process led by indigenous leaders of the Borana and Gabra pastoralists of southern Ethiopia and northern Kenya.

We are Not Poor! Dominant and Subaltern Discourses of Pastoralist Development in the Horn of Africa

This paper explores a moment in a policy meeting in Nairobi in 2009, at which pastoralist customary leaders criticised development agencies’ framing of their situation as poverty stricken and in crisis.

Notes from the University of the Bush, Kinna, Garbatulla District, Kenya

Notes and pictures from the University of the Bush event held in November 2010, organised by Pastoralist Consultants International in collaboration with Pastoralist Shade Initiative and Future Agricultures Consortium. Pastoralists from Ethiopia and Kenya gathered to listen to and comment on 6 pieces of research into different aspects of pastoralist innovation, including peace management, camel and camel milk marketing and land use.

The Puff Adder, the Fire, the Spear, the Peace 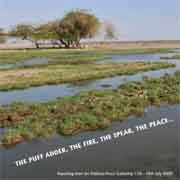 Reporting from the Peace Gathering that took place in Maikona, Chalbi District in Kenya in July 2009, this publication documents the discussions held between the Borana and Gabra communities from Ethiopia and Kenya around peace, and how to maintain it. The report also covers a second follow-up meeting that was held at Walda, Sololo District on 26th July 2009 and includes a copy of the peace declaration signed by representatives of both communities.

Dhadacha Nagaya: The Acacia of Peace

Dhadacha Nagaya reports on the June 2009 gathering hosted by the Dukana community in Chalbi District, Kenya to discuss and review recent peace accords between them and the Dillo community across the border in Ethiopia. Pastoralists and Government Officials give their views on how to expand the agreements made between Dillo and Dukana in an effort to work towards peace between the Gabra and Borana along the Kenya-Ethiopia border.

Gathering for Peace documents the Ethiopian Pastoralist Peace Gathering, which took place in January 2009 in southern Ethiopia. Gathering for Peace presents the voices of pastoralists and government representatives from across Ethiopia and Kenya discussing the best ways of managing peace and the interplay of customary and formal law when dealing with conflict.

In August 2008 pastoralists from Ethiopia and Kenya met in Koora, Kajiado District, Kenya to debate issues of key importance to them, such as land access and peace. The Kenyan pastoralists used the discussions to help build a strong working relationship with the new Ministry for the Development of Northern Kenya and Other Arid Lands, whose Minister, Assistant Minister and Permanent Secretary attended the gathering. Finding the Way Forward documents the discussions.

Pastoralists of South Omo in south-west Ethiopia met together and with their neighbours from Kenya, Southern Sudan and the Bench Maji Zone at this gathering in November 2007. Hosted by the Nyangatom community, they met on the banks of the River Omo. This publication follows the discussions, showing how they laid the foundations for peace.

Amharic version of The Peace Generation

Peace, Trade and Unity, Reporting from the Horn of Africa Regional Pastoralist Gathering

The Horn of Africa Regional Pastoralist Gathering at Qarsaa Dembii in Ethiopia was a rare opportunity for pastoralists from across the Horn and from further afield to speak to one another face to face. Among the subjects discussed, they focused especially on finding new routes to peace, opening up opportunities for trade and developing new forms of organization and administration.

Rain, Prosperity and Peace: Reporting from the Global Pastoralist Gathering

The Global Pastoralist Gathering at Turmi in Ethiopia was a rare opportunity for pastoralists from across the globe to speak to one another face to face. The event was part of setting up the World Initiative on Sustainable Pastoralism.